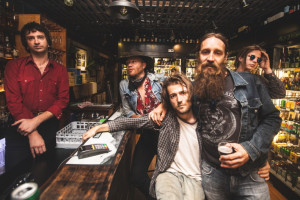 O’Neill’s trade is the written word. A prolific poet, novelist and songwriter he has completed his second novel “Run To The Dust” based on his experiences as a union delegate leading an industrial dispute working on a huge construction project in the desert – around the time large parts of his second album “Death of a Gringo” was written. Late last year he finished his first collection of poems, The Condition Report 45.

2018 saw the NARODNIKS release the Death of a Gringo album on Beast Records in France. Following this release the band embarked on their European tour playing over 41 dates across the continent including 3 shows at the legendary Binic Blues festival in France. While in the Czech Republic they recorded at Sono Records studios with legendary engineer and producer Milan Cimfe who has worked with David Bowie, Lou Reed and Kris Kristofferson.

O’Neill and the band plan to release their thirth album in late 2019. They are going to tour Europe in November 2019. “Jesus in Hell”, the first single from the album was premiered in Australia on 25 December 2018 via Happy Mag (listen to here).

“Think Nick Cave & The Bad Seeds meets the old school sounds of The Veils meets Mark Lanegan… Filled with tension and drunken swagger with a deliciously complementing haunting violin: Australian singer songwriter Rhyece O’Neill impresses us with “The Fire in You.” Gobsmag.nl

“Ubermensch Blues” grabs you first time and you’ll be returning over and over. It’s a sound investment, if not essential. i94bar.com 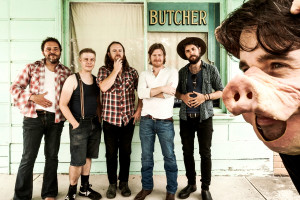 Graveyard Train are a six piece collective from Melbourne, Australia. The initial idea was for six men to sing in baritone about Werewolves, Vampires, Ghosts and the like over frenetic foot stomping country music. A wacky idea that worked and instantly collected fans across the globe.

In a song writing sense Graveyard Train are storytellers who revel in the dark or macabre. Like a virus, Graveyard Train’s music evolved into something much richer, forceful and potent. Banjos, dobros as well as their untraditional hammer and chain have carried the intensity of their notorious live shows through the US, Canada, UK, Europe and of course all over Australia.

Over a few short years the band had morphed from a bunch of mates getting drunk and playing small dive bars to a band trying to maintain some semblance of the professionalism needed to play international festivals and headline major theatres. Their 2nd album Hollow swiftly pulled 5 stars from several big Australian media, filled a space in PBSFM’s Top 10 and Mess+Noise’s Top 20 Albums Of The Year and the lead single I’m Gone was the #1 most played song on Australian Community Radio. After headlining the Forum and selling out consecutive Hi Fi shows in Melbourne, getting the coveted audience-approved Golden Boot at Meredith Music Festival, playing to inmates in a prison, seducing 25,000 punters on the main stage at West Coast Blues N Roots, touring the world and then having some redneck write a song about how they ruined Tamworth, in a lot of ways the band felt they accomplished more than they set out to do.

Then someone wrote a song. The band reconvened to inhabit a studio space. More songs came quickly and they walked away from the desk with a new record and realisation that when they were writing, recording and putting on some of the finest live shows around, they were unstoppable. That reinforcement is tattooed on record opener, lead single and title track, Takes One To Know One. It encaspsulates both a childish insult and a driving sound of classic Graveyard Train. Repeated listens of the entire LP reveals gems and oddities buried in a sublime, sometimes tortured marriage of country music, stoner rock, classic Graveyard gang vocals, haunting storytelling and the stellar musicianship that dyed-in-the-wool fans of the band have come to expect. With their new record under their arm, and their own label, Black Hat Rackets, GT have paired up with revered European label Cargo Records to release the new record to a worldwide audience. 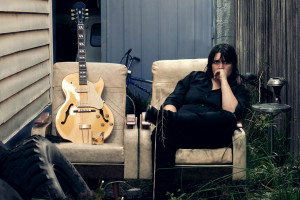 Australian CASH SAVAGE & THE LAST DRINKS are coming back to Europe to promote their new album “One of Us” which will be released in Europe on 4th November by Beast Records and distributed by Cargo Rec. The tour will start on 4th November too with their showcase at Nouvelle Prague festival in front of festival promoters and will continue with shows in the Czech Republic, Germany, Austria and France. 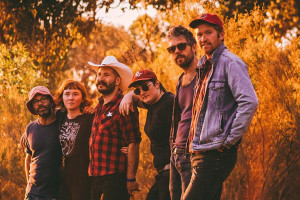 “Savage sings like salvation depends on it – though not hers.” The Guardian

Hypnotising audiences worldwide with their signature brand of country, blues and indie rock plus irresistible authenticity, Cash Savage and the Last Drinks are an award-winning six-piece with a live performance hailed among Australia’s best. Cash Savage’s heart-pumping live shows are backed by the devastating honesty of her lyrics and the raw talent of the band behind her.

Following on from 2016’s hugely acclaimed album One Of Us, 2018’s Good Citizens raises the stakes and signals the ascent of Cash Savage and the Last Drinks as one of the heavy hitters of Australian music’s new era. An incandescent live band at the height of their powers, led by mighty frontwoman Cash Savage, whose potent lyrics and impassioned delivery articulate the personal-political issues of these times with all her heart, guts and grit. Having towered over festival audiences at Golden Plains, Boogie and Sydney Festival, selling out The Corner in her hometown of Melbourne, and earning rave reviews for her recent packed-out Sydney show: (“You’d be hard-pressed to find a more exhilarating and heart-swelling live band in this country”– The Music), Cash Savage and the Last Drinks are on a mighty roll. The band has also made serious inroads in Europe, playing to huge crowds at festivals such as Binic Festival (France), Colours of Ostrava or Rock For People (both in Czech Republic). Good Citizens begins and ends with a thought. “I’m thinking violence is the answer”, Cash Savage sings as the Last Drinks rally behind her.

Of course, it’s just a thought. And this is just a song. But the music Cash Savage is making is informed by real life — her own, and those of the people for whom violence, or the threat of violence, is inescapably real. The human beings who are called minorities and treated as though their lives matter less than others. The women and children on whom domestic violence is enacted, and those in the LGBTIQ+ community for whom violence is an implied or overt threat behind the rhetoric of “family values” and “good citizens”.

The album opens with “Human, I am”, ringing out with a phrase that resonates in the #NotAllMen era: “It’s okay, you’re not one of them”; a disclaimer that many minorities feel they need to use when articulating the oppression they experience. The lyrics that follow call “time’s up” on the need to apologise; “I know what I am, I’m not yours / Not a leader / Not a follower / Not brave / Not yours / I am human”. “We’re all humans,” Cash affirms, “which means we’re all part of the problem. And we’re all part of the solution.”

The album comes to a devastating conclusion with “Collapse”, a song Cash wrote for her daughter. “I hope she understands that the world is a violent place,” Cash explains. “She’s growing up in a world where there’s violence everywhere, but our privilege allows us to believe that violence is someone else’s problem. The wars that are fought are at a distance. A non-violent life is a privileged life, and fewer and fewer people are living that privilege.”

The politics of Good Citizens hit home all the harder for their juxtaposition amongst songs that are deeply, passionately, personal. The ache of missing a partner (‘February’), the heady highs of falling in love (‘Sunday’), and the triumph of knowing that love is indestructible (‘Found You’). Even as it peers into the abyss of the anger and brutality that rock our times, Good Citizens burns with a fierce flame of belief in the goodness that may yet prevail.

“…But it’s live that Savage and her Last Drinks come into their own. This was one hell of a powerful, confident and intense show.” FBi Radio, Sydney Festival

“…country punk’n’roll coming out of the blackness with more power than the wind.”
Rolling Stone Australia

“One of Us – Album of the week” Beat Magazine

“Savage comes at us with gruff, dirty-fingernails country-rock like her life depends on it” 4/5 Herald Sun

“There’s a pain that rattles the core of Cash Savage’s third album… full of blues grunt and country groove that holler badass one minute and banjo tinged mellow the next” 4,5/5 – The Age

“The Hypnotiser is as assured and as compelling as anything released by an Australian artist this year… you know you are hearing a major new talent.” 4/5 – The Courier Mail

“Savage and her band trade in spooky gothic folk blues, the cry of fiddle strings and bite of a banjo redolent of beer and smoke. It’s a tense, sultry sound, staring down the fear that lurks on dusty, bloody, delta back roads, proselytising the gospel of rock’s own truth, ripe with a sense of theatre and omens while embracing the simple pleasures of a little love song.” 4/5 – The Age / Sydney Morning Herald

“The Hypnotiser is a melancholy, frank recording by an artist who has the ability to stick to her guns, yet be as chameleonic as she needs to be to get the job done. No mean feat.” Mess + Noise