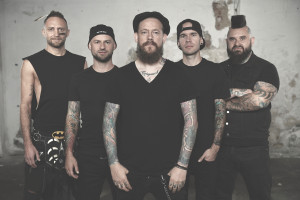 PIPES AND PINTS are punk-rock-folk band established in Prague in 2006. The band’s trade marks are Highland bagpipes and punk sound and attitude. Since their beginning these guys don’t hesitate to hit the road with a passion which has gained them a reputation of true believers who give it all.

In 2009 in cooperation with Wolverine Records and Unrepentant Records the band released their debut album “Until We Die” followed by 2010 European tour which included 110 club and festival shows, some of them as a support for Los Locos. The album was positively reviewed by media and radios not only in Europe but also in Japan, North and South America and Australia. The band was featured in foreign music charts, for example in American Top Ten Shite‘n‘Onions or Germany’s Celtic-Rock.de.

Their second album “Lost and Found” was produced by Darian Rundall (Pennywise, Suicidal Tendencies, US Bombs etc.) and released on November 2011 by Sony Music/Century Media/People Like You Records. The album reached Anděl Award in the Czech Republic and got lot of positive reactions from critics and media in the Czech Republic and Europe. Fans supported the album and sold out concerts during the winter tour. The icing on the cake was the invitation to CEETEP festival exchange program, resulting shows at festivals like B’estfest (RO), Les Feux de Lete (FR), Rock’n’stock (FR), Eier mit Speck (DE) plus another European and Russian tours in 2012 – 2014.

The band was going better and better but due to personal reasons after 2016 summer season had decided to take an indefinite break during which both guitar player and singer left. The rest of the group really missed playing live concerts and in a short time they found a new singer and guitar player. The new formation immediatelly fulfiled their calendar of concerts and summer festivals for 2018 and beginning of 2019. Release of a new album is scheduled to May 2019, to be recorded in Red Bull Studios Berlin. The new era of Pipes and Pints has just begun.