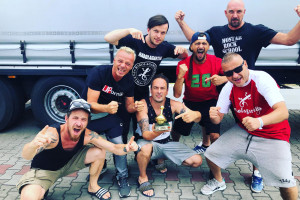 TERNE ČHAVE are considered as probably the oldest working and definitely one of the most famous Roma (Gypsy) bands in the Czech Republic. The band is renowned for their distinctive sound blending Central European traditional gypsy music with funk, rock, soul, ska, jazz, blues and other influences. Many years ago these musicians have stood on their own feet and crossed borders of Roma ghetto. Bringing their gadjo friends as musicians among themselves they set out into the big world. Touring Europe from Czech Republic and Slovakia via Poland, Hungary, Italy, Spain, France, Germany, Benelux, England to Scotland, wherever they go people are dancing.

Today Terne Čhave are band without ethnic or genre limits but their gypsy roots give them a solid base for musical trips to destinations too distant for many others. The band doesn’t fuss about style too much and you will have no time to think about it too because much of their songs are played with devil’s tempo. But in case you wouldn’t sleep this off we can reveal that this is the real gypsy rock’n’roll or … It’s only Rom’n’Roll!!!

Once upon a time (2003) in a dubious corner of the world and a land called Bosnia and Herzegovina, a group of friends decided to form a band. But this was no ordinary band, and they did not form under ordinary circumstances. True, along with local Balkan flavors, musical influences came from all over the world: ska, punk, reggae, electronic, hiphop. Yet, there was no music industry, few concerts, no space for cultural or political expression among the new crop of plugged in youth. In fact, the entire region was reeling from deep moral and economic post-war stagnation. It was from this environment that DUBIOZA KOLEKTIV was born, and not quietly, but kicking and screaming, presenting no-go topics front and center, and demanding to be heard. In doing so, they created a phenomenon.

For a quick rundown of the band’s history, their selfentitled first album “Dubioza kolektiv” was released in 2004, and was instantly met with an enthusiasm not seen on the Bosnian scene since pre-war times. Next came the EP “Open Wide”, this time featuring dub poet Benjamin Zephaniah and Mush Khan from Funda-mental. Then came their second full-length CD “Dubnamite” and this is when their popularity began tospread beyond Bosnian borders. By 2008, with the release of “Firma Illegal”, their bold and uncompromising stand against the nationalist establishment elevated them to fame across the entire Balkan region. In 2010, album number four titled “5 do 12” followed, and in an open snub to ultra-capitalist music labels and as an expression of commitment to their fans, Dubioza made the album available for free download at dubioza.org.

It was around this time that Faith No More’s Bill Gould discovered Dubioza Kolektiv, and his label Koolarrow Records, picked up their fifth album “Wild Wild East” and introduced the band to the international stage with worldwide distribution.

“Apsurdistan” was released in 2013, becoming a huge success with more than 300,000 downloads. Animated music video for the featured track “Kažu” was viewed 35 million times on YouTube and their Western Balkans tour sold-out arena-size venues. All of this, along with a relentless approach to touring, has brought Dubioza’s sounds to every corner of Europe.

In 2016, the band released their seventh LP album, “Happy Machine”with guest appearances by Manu Chao, Benji Webbe from Skindred, Punjabi singer BEE2, Catalan ska-rumba band La Pegatina and trumpet player Džambo Agušev from Macedonia. Inspiration developed over two years, largely inspired by events that unfolded over that time – from Istanbul’s Gezi park protests (“All Equal”) or the Syrian refugee crisis and Europe’s shameful response to it. The video for the album’s single “Free.mp3 (The Pirate Bay Song)” was featured on the homepage of the world’s most famous torrent site thepiratebay.org. Another highlight was the video and the song itself – “No Escape (from Balkan)”. Their first US-tour followed, with a debut at SXSW and concerts in several North American cities in venues such as 9:30 in Washington, D.C. They were selected as No.1 band at 2016 Eurosonic festival, per European festivals votes.

“Pjesmice za djecu i odrasle”, another album in their local language, was released in 2017, in combination with a feature documentary “Film za djecu i odrasle” that chronicled the band’s history and making of the album. “Himna generacije” and “Rijaliti” became instant hits with millions of views.

Following in the footsteps of their previous collaboration on the song “Red Carpet”, Dubioza kolektiv and Manu Chao teamed up for another power-house single “Cross the Line”, announcing their new album “#fakenews”, which will be available at the end of January 2020. The album features guest appearances by legendary dub-reggae artist Earl Sixteen from Dreadzone, Soviet Suprem, Mexican band Los de Abajo and an exclusive appearance by Robby Megabyte, soon-to-be-famous Internet superstar robot. Songs are in English, Spanish and Google-translated French.

Over the years, Dubioza Kolektiv became the biggest band in the Balkans, with sold out shows in venues with 12,000+ capacity in Zagreb, Belgrade, Ljubljana, Pula, Rijeka, Split, Sarajevo, Sofia, etc. Besides the Balkan region, they played sold out shows in USA, Canada and all across Europe: London, Amsterdam, Berlin, Dublin, Budapest, Oslo, Prague, Vienna, Madrid, etc. The band also performed at major European festivals, such are Glastonbury, Roskilde, Lollapalooza, Boomtown Fair, Sziget and so many more. They set the attendance record at Exit Festival’s Fusion stage and played in front of half a million people at Pol’and’Rock Festival, where they received Złoty Bączek award for the festival’s best international performance in 2018, voted by the audience.

They toured and continue touring tirelessly, having over 100 shows per year. Audiences across the world recognized them as a must see live act. Their history has shown: these guys don’t stop until they achieve their objectives. If you are looking for macho, money-and-ego driven posturing, you will not find it here – no MTV “rude boy” gangstas, no strippers or bling, no corporate endorsements from the international fashion industry. Rather, they take on traditional musical forms and enrich it with their unique perspective, which is delivered with a level of positivity that hits you like a blast of fresh air. If you are open to the experience, it could change your life too.